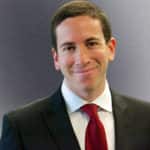 Panish | Shea | Boyle | Ravipudi LLP attorney Robert Glassman has been named among Law360’s Rising Stars for 2018 in the area of Personal Injury & Medical Malpractice. The Rising Stars list, selected from more than 1,200 submissions, includes 168 attorneys under the age of 40 whose legal accomplishments “transcend their age” in their respective disciplines.

In an interview with the publication,  Mr. Glassman shared details about his biggest case in his career, Lee v. Pupil Transportation Cooperative, as well as what motivates him in personal injury law and his proudest moment as a Plaintiffs’ attorney: Seeing the Lee case memorialized into legislation that honors decedent, Hun Joon “Paul” Lee. 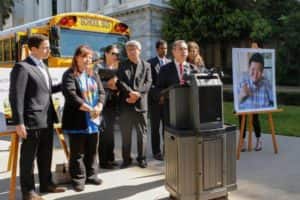 “Being up in Sacramento, the state capitol, standing with the parents, discussing the law, being up there and helping make it a reality, making this law in Paul Lee’s name be something that everyone is going to be protected by in California, was my proudest moment,” he says. “These are arguably the most vulnerable people in our society. Somebody has to watch over them and be their guardians. When school districts screw up and play fast and loose with the rules, it’s good that we have a system to hold them accountable.”

Mr. Glassman is a staunch advocate for students who have been injured or killed as a result of school district negligence. He recently obtained an $11 million settlement for the family of Alex Pierce, a middle school student who drowned while participating in a school-sponsored swim party in Murrieta Valley Unified School District, and is working with Assemblywoman Melissa Melendez to create a water safety and rescue training bill to be named in Alex’s honor. He also recently secured an $2 million settlement for Ethan Kalnins, a La Canada High School junior with Cerebral Palsy, who was severely injured while attending a school assembly when he fell off the side of the school’s telescopic bleachers, which had no guardrails.