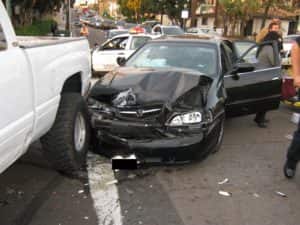 A San Diego County Superior Court jury has awarded $1,957,500 to a man who suffered a back injury after his pick-up truck was struck by another vehicle whose driver was distracted and ran a red light at an intersection. Plaintiffs were represented at trial and in the case by Robert Glassman and Nathan Werksman of Panish | Shea | Boyle | Ravipudi LLP.                                                                           On November 18, 2014, Plaintiff Genovevo Ortega was driving a white 1999 Dodge Ram pick-up truck, traveling through a green traffic signal, and headed southbound on 30th Street in San Diego. Defendant Janlene Lim, driving a black 2000 Acura 3.2TL, was traveling westbound on Broadway when she failed to stop for a solid red traffic signal. As she drove through the intersection on 30th Street and Broadway, her vehicle collided with the driver’s side of Mr. Ortega’s truck.  As a result of the collision, the 35-year-old husband and father of two suffered injuries to his lower back. For approximately seven months, Mr. Ortega received conservative chiropractic treatments before undergoing two facet joint injections in his spine. He resumed work as a tile setter but continued in pain and sought additional treatment including a lumbar discogram in 2017 as well as a single level lumbar fusion in 2018 followed by a couple of months of physical therapy.

Due to anticipated adjacent-level accelerated degeneration, Mr. Ortega is expected to have another fusion surgery in the future.