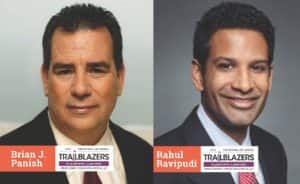 Panish | Shea | Boyle | Ravipudi LLP attorneys Brian Panish and Rahul Ravipudi have been recognized as 2019 Plaintiffs’ Lawyer Trailblazers by the National Law Journal. The list recognizes plaintiff lawyers from across the country who are agents of change and have shown a deep passion and perserverance in pursuit of their mission.

As noted in the article featuring Mr. Panish, he has obtained over 100 verdicts and settlements worth more than $10 million and six verdicts over $50 million in plaintiffs personal injury and wrongful death cases. In 2018, Mr. Panish and his trial teams obtained two landmark verdicts — $52.7 million in Lennig v. CRST, Inc. and $41.8 million in Lo v. Southern California Gas Company. He has been appointed to serve on the plaintiffs’ steering and executive committees in several mass tort and major disaster cases, including litigation involving train crashes including the Chatsworth Metrolink disaster, Glendale Metrolink crash and the Placentia Metrolink collision. Mr. Panish is currently serving as co-lead counsel in the Thomas Fire litigation and as co-lead trial counsel, representing over 7,000 clients, in the Porter Ranch Gas Leak litigation.  “It’s the largest one in history,” said Mr. Panish. “I’m working to continue to get great results for clients to make a difference in their lives and try as many cases as we can, if necessary.”

Rahul Ravipudi, who also serves as co-lead counsel in the Thomas Fire litigation, has spent his legal career handling catastrophic injury and wrongful death cases — recently obtaining a $160.5 million verdict for a client who suffered a brain injury and the loss of his livelihood as a result of beating by security personnel for a nightclub — as well as representing consumers in class actions against businesses and victims of school negligence.

“One of the cases I’m extremely proud of is the Paul Lee case,” said Mr. Ravipudi. “He was a 19-year-old nonverbal autistic child, and the school bus driver left him on the bus in the bus yard. He died of hyperthermia. It struck a chord within me, and I realized we needed to do something about it.”

Taking care of children resonates with Mr. Ravipudi. In addition to the $23.5 million settlement obtained for the family in Lee v. Pupil Transportation Cooperative, Mr. Ravipudi and his team obtained a $20 million verdict for the mother of a high school student who was killed while walking to a school bus stop, and an $11 million settlement for the family of Alex Pierce, a middle school student who drowned during a school sponsored swim party.  “We are also working to get laws into place to make sure that school districts have third parties come in to determine why a school is unsafe and what can be done to make it better. They are also required to make findings public so others can see what safety measures are recommended, so all schools are safer. Where things are not legally mandated, we are working to get legislation passed to make schools safer.”

The work of Mr. Panish and Mr. Ravipudi has been successful in leading to changes in the law and making schools safer in California. In 2016, Governor Jerry Brown signed into law the requirement that all school buses be equipped with a child safety alarm system that must be deactivated by the bus driver before departing the bus.

“It’s called the Paul Lee School Bus Safety Law and requires a special device on the back of a bus that requires the driver to make a sweep. In this case, the driver was in a hurry and left a kid on the bus when it was over 100 degrees.” said Mr. Panish. “We got a $23.5 million settlement. But more importantly, the guy was sent to jail, and the law changed to protect more kids. It was named to honor Paul Lee.”