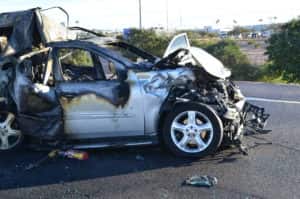 Panish | Shea | Boyle | Ravipudi LLP attorneys Adam Shea, Ryan Casey, and Nicholas Yoka obtained a $5,000,000.00 compensatory verdict, and a finding by the jury that Defendant’s conduct warranted imposing punitive damages, in Maricopa County, Arizona for the parents of 22-year old Paul Troupe, a young man killed by a big rig whose driver had fallen asleep at the wheel and rear-ended the SUV driven by decedent.

After the jury awarded Paul Troupe’s family $5,000,000.00 in compensatory damages and found that the defendant driver, Brian Knoll, engaged in misconduct warranting imposition of punitive damages, the case resolved for a confidential sum prior to the start of trial phase to determine the amount of punitive damages to be awarded.

Newlyweds Paul and Sarah Troupe, both aerospace engineers with Boeing, had traveled from Missouri to Phoenix, Arizona where Sarah was to receive an award for her contribution to the aerospace and defense industry. As the couple drove to the event, their SUV was struck from behind by a semi tractor-trailer and pushed across the highway into other vehicles, striking a retaining wall before it spun free, caught fire and filled with smoke. Good Samaritans pulled the couple from the burning vehicle. Sarah sustained personal injuries but survived the collision. Paul died as a result of his injuries.

Defendant Knoll had no memory of the collision, other than to say he thought he fell asleep, and when asked by police why he would drive in such a condition, he replied  that it’s a “money thing”— he gets paid by the load, so if he stopped to sleep, he would lose  money. He admitted to police that he knew and recognized the dangers of driving in that  sleepy condition. Knoll was charged criminally, and entered a guilty plea to three counts of  felony Endangerment.

Throughout the case, and continuing at trial, Defendants contended that an Arizona jury would never find that punitive damages would be warranted or that it would award substantial compensation to the parents of a 22-year old married adult child. In closing argument, Defendants argued that the appropriate verdict was in the range of $800,000.00 to $1,300,000.00.