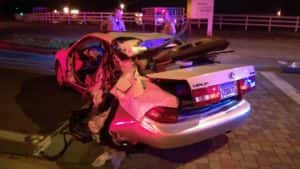 Panish | Shea | Boyle | Ravipudi LLP attorneys Kevin Boyle, Andrew Owen and Matthew Stumpf have obtained a $6,126,000 jury verdict for Chung Wu Hsu, a 62-year-old woman who suffered severe and traumatic injuries after her vehicle was broadsided by a box truck whose driver had ran a red light after he dozed off behind the wheel.

“Ms. Hsu’s life is forever changed as a result of this horrific collision,” said attorney Kevin Boyle. “The jury’s verdict will enable her to get the continued medical treatment she needs and to live her best life possible despite her devastating injuries. We are honored to have represented her in this case.”

Plaintiff Hsu was driving her 1998 Lexus ES300 in the City of Santa Clarita in the early morning hours of July 5, 2017. As she traveled eastbound on Newhall Ranch Road and approached the intersection with Copper Hill Drive, she continued with the right-of-way on a green light when her vehicle was violently T-boned by a white box truck driven by Defendant Moises Roberto Martinez Diaz. As a result of the collision, Ms. Hsu suffered serious and permanent injuries including trauma to her cervical spine multiple rib fractures, and a traumatic brain injury.

Defendant Martinez, an employee of R & P Food Processing, Inc. who was acting within the course and scope of his employment at the time of the collision, admitted to the investigating officer at the scene that he was “half asleep” and that he had ran a red light. He was cited by police for the red light violation and paid the fine – never disputing or appealing the California Vehicle Code 21453(a) violation conviction.

Defendants fought liability and Ms. Hsu’s claim for damages for years.  Approximately six (6) months after the incident, Plaintiff made a reasonable settlement demand because liability was unequivocally clear and the damages were so significant that they obviously exceeded defendants’ $1 million insurance policy limits. Shockingly, defendants’ insurance company failed to accept the demand.  They continued to deny liability for years until the eve of trial, when they finally admitted Defendant Martinez was the sole cause of the collision.

Additionally, and as a result of Defendants failure to accept the Plaintiff’s CCP 998 Offer to Compromise for $1,000,000 in December 2017, the verdict is subject to prejudgment interest at 10 percent per year. With the interest, as well as fees and costs, the total result will exceed $7,300,000.