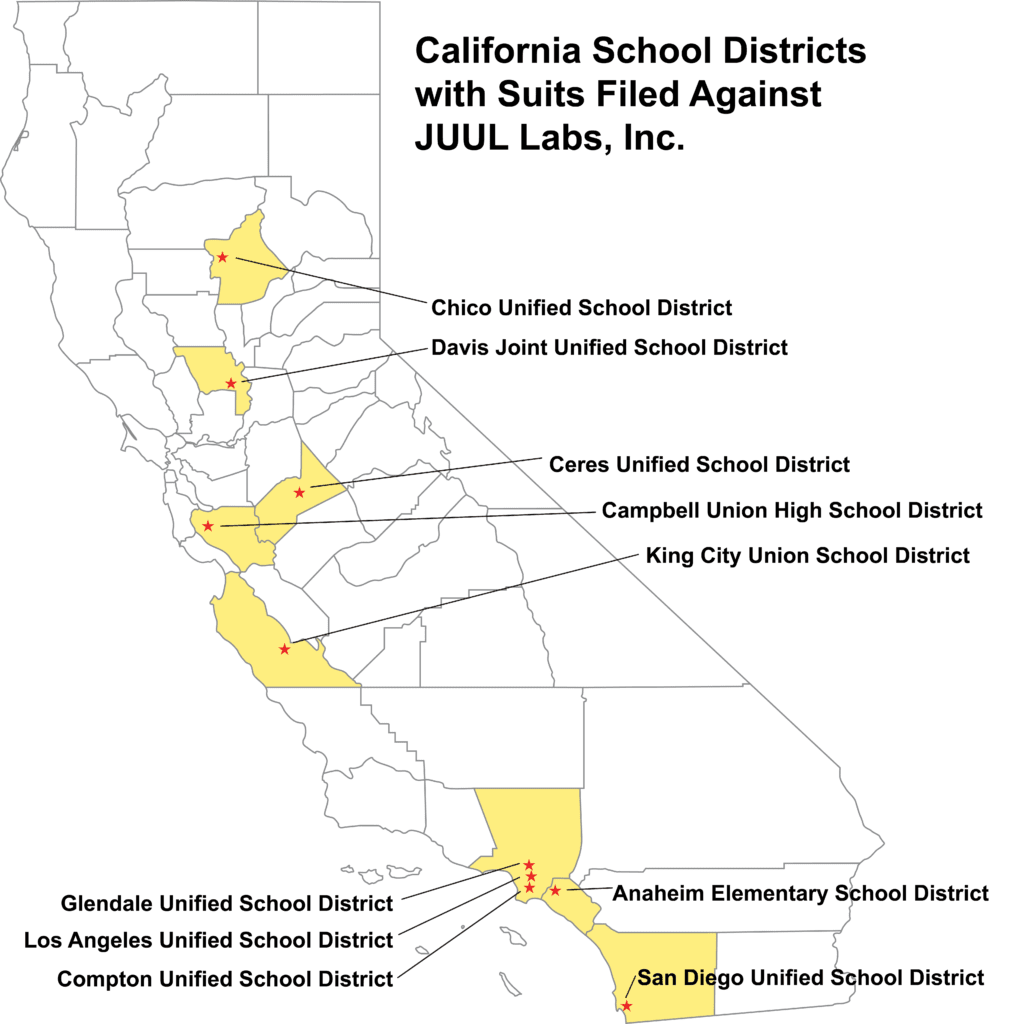 “It’s inspiring to see school districts across California stand shoulder-to-shoulder to take on JUUL, the schoolyard bully that preys on our kids and puts the health and academic success of all students at risk,” said Panish | Shea | Boyle | Ravipudi LLP Partner, Rahul Ravipudi. “We’ve spent our careers standing up against companies like JUUL that think they can take advantage of the most vulnerable in our society without consequence. The safety and wellness of our children is priority number one and we’re proud to stand beside these Districts in championing that mission – we won’t stop fighting until justice is served.”

“These ten school districts, which represent over 900,000 students, are part of a statewide movement to hold JUUL accountable for the expenditure of public and taxpayer resources required to respond to the vaping crisis,” said Baron & Budd Shareholder, John Fiske. “School districts of all shapes and sizes are standing up for their student communities—from northern, central, and southern California, from urban, suburban, and rural communities, and from large, medium, and small in size—they are all standing up.”

The lawsuits seek injunctive relief and abatement remedy to combat the e-cigarette epidemic, which has severely impacted the school districts by interfering with normal school operations. The districts are also seeking compensatory damages to provide relief from the districts’ financial losses as a result of students being absent from school, the extensive costs to orchestrate outreach and education programs regarding the risk of vaping, and deploying the enforcement restrictions – such as vape detectors, surveillance systems, and staff to monitor the school’s property in an effort to combat the e-cigarette crisis.

Since entering the market in 2015, JUUL has dominated the e-cigarette industry and now controls over 70% of the market. Over a million JUUL e-cigarettes were sold between 2015 and 2017. In fact, the e-cigarette category grew 97 percent to $1.96 billion between June 2017 and June 2018 along. That growth is largely based on JUUL’s market strategy which is to target school-age children.

The National Institute on Drug Abuse found that the 2018 spike in nicotine vaping was the largest for any substance recorded in 44 years and the number of youth e-cigarette users increased by 1.5 million between 2017 and 2018. JUUL’s aggressive, strategic marketing and product designs not only create an addiction crisis among youth consumers, but also a broader health crisis.