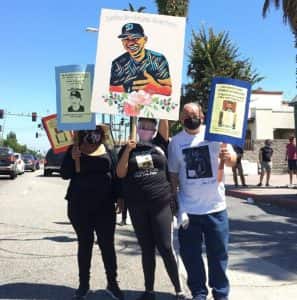 As alleged in the complaint, Deputy Miguel Vega shot and killed Andres Guardado on June 18, 2020. Vega and his partner, Deputy Hernandez, arrived to Andres’ place of employment and in a display of unreasonable and excessive force, immediately drew their weapons and chased Andres down an alleyway in violation of defendants’ policies and procedures. Without provocation and with conscious disregard, Deputy Vega discharged his firearm no less than six times — five (5) bullets struck Andres in the back, “each of those five gunshot wounds possessed an independent lethal capacity, ultimately causing his tragic and untimely death.”

Andres “never posed a risk of imminent injury or death to Deputy Miguel Vega, Deputy Chris Hernandez, or any other person” and defendants had no reason to believe Andres had committed a crime.

Plaintiffs allege defendants knew Vega and Hernandez were unfit to carry out the duties of a police officer as each “had a history of improper uses of unjustified excessive force, improper discharging of their firearms, bad traffic and pedestrian stops, failing to follow proper procedures, making false statements during investigations, and other improper conduct.  Yet, they were never disciplined, or were not disciplined properly, and were never trained or re-trained properly, and were never removed from service.  All the above components and factors also contributed to the death of Andres Guardado.”

Plaintiffs, based on information and belief, further allege defendants — LASD, County of Los Angeles and Sheriff Alex Villanueva — knew about deputy gangs within the Sheriff’s Department, knew that deputies Vega and Hernandez “had possible affiliations with at least one of these Los Angeles County Sheriff’s Department gangs including, but not limited to, the gangs known as the Executioners and/or the 3,000 Boys” and that these same deputies “were possibly acting in connection and in agreement with these other gang members” on the day of Andres’ death.

“The blood of Andres Guardado lays not only on the hands of Deputy Miguel Vega, but on every member of the Los Angeles County Sheriff’s Department who has dismissed their oath to support the Constitution of the United States and the Constitution of the State of California,” said attorney Adam Shea. “When the facts are fully disclosed, we are confident that a jury will deliver justice that reflects how grossly the Sheriff’s Department and Los Angeles County officials have failed Andres, his family and the people of the communities they have sworn to serve.”

Defendants actions deprived Andres of “his right to be secure in his person and free from the use of excessive force, the right of protection from bodily restraint and harm, the right to due process, and equal protection.” Plaintiffs further assert that the conduct of the deputies was “done in a willful and conscious disregard for the rights and safety of decedent. Defendants conduct was despicable and so base, vile, and contemptible that it would be looked down on and despised by reasonable people.”

Andres’ wrongful death has deprived his parents of his life-long love, affection, care, society, service, comfort, support, companionship, solace or moral support, expectations of future support and counseling for the remainder of their lives. Plaintiffs are seeking general, economic, and statutory damages — including funeral and burial expenses, loss of financial support and attorney fees — as well as punitive damages against the individual defendants in an amount to be proven at trial.

“By filing this lawsuit, we are not only committing to expose the truth surrounding the unjustified shooting of Andres Guardado, but seeking to prevent this type of tragedy from happening again to anyone in our communities,” said attorney Nicholas Yoka. “The Guardado family deserves their day in court and they are now taking the first step toward getting justice for the death of their son at the hands of the Los Angeles County Sheriff’s Department.”