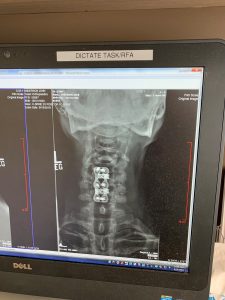 PSBR attorneys Robert Glassman and Jonathan Davidi obtained a $2,000,000 settlement for truck driver John Anderson who suffered exacerbated cervical disc herniations that required surgery after his vehicle was broadsided by another truck.

Mr. Anderson was driving in Carson, California when his vehicle was broadsided by another truck operated by defendant Raymond Carreon during the course and scope of his employment with R & R Transportation. As a result of the collision, Mr. Anderson exacerbated a previously herniated disc injury and he was taken to the hospital where he was treated and released. In the months that followed, the 67-year-old Plaintiff underwent physical therapy and received epidural steroid injections before ultimately undergoing a two-level cervical fusion that provided significant pain relief and enabled him to return to work.

Defendants admitted liability but asserted that the Plaintiff’s injuries could not wholly be attributed to the accident and as they were in-part, pre-existing and degenerative. Specifically, Defendants pointed to the fact that Plaintiff received an epidural steroid injection to the same part of his neck just one month prior to the incident. The parties agreed to settle the matter for $2 million prior to trial. Plaintiff was also represented in the matter by Joseph S. Nourmand of the Law Offices of Joseph S. Nourmand.