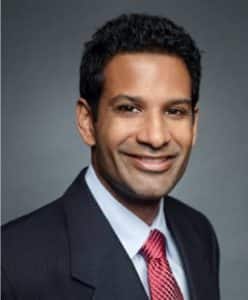 Panish | Shea | Boyle | Ravipudi LLP partner Rahul Ravipudi is honored to be named Best Lawyers 2023 “Lawyer of the Year” in the area of Mass Tort Litigation / Class Actions — Plaintiffs in Los Angeles. As noted by Best Lawyers, receiving this designation reflects the high level of respect a lawyer has earned among other leading lawyers in the same communities and the same practice areas for their abilities, their professionalism and their integrity.

In addition to being named 2023 Mass Tort Litigation / Class Actions – Plaintiffs “Lawyer of the Year” for Los Angeles, Mr. Ravipudi was also included in the 2023 edition of The Best Lawyers in America® in the following practice areas:

Mr. Ravipudi currently serves as Public Entity Plaintiffs’ Co-Lead Counsel in the JUUL Labs Product Cases, representing school districts and other public entities in California involved in litigation against the electronic cigarette manufacturer. He also serves as Plaintiffs Co-Lead Counsel in the Southern California Fire Cases litigation arising out of the 2017 Thomas Fire and subsequent debris flows in Montecito, California as well as on the Plaintiffs Executive Committee in the California North Bay Fires litigation. He previously served on the Steering Committee in the Blythe bus crash litigation.

Mr. Ravipudi recently represented a class of students with disabilities in a discrimination class action against the ACT, Inc., the administrator of the standardized college entrance exam.  In 2021, he and his team secured on behalf of a nationwide class a consent decree preventing ACT from engaging in the alleged discriminatory practices, as well as $16 million for a California subclass of examinees.