It is accurate to say that plane travel is among the safest modes of transportation. However, when aviation accidents do happen, the results are often catastrophic. There are no such things as minor airplane collisions or crash landings, these occurrences are devastating, life-altering events. Aviation accident rates have gone down in recent years, but the growing popularity of private jet travel and helicopter flights may soon reverse that trend.

In 2007, the National Transportation Safety Board estimated a total of nearly 24 million flight hours. Of these 24 million hours, 6.84 of every 100,000 flight hours yielded an airplane crash, and 1.19 of every 100,000 yielded a fatal crash. This is down from an all-time high of 9.08 accidents per 100,000 hours in 1994. These numbers are higher for private flights, but private flights are much harder to document due to lax government regulation and non-reporting. Private plane crashes have been on the decline since the 1980s, but user error and insufficient training still contributes to many more accidents than are necessary each year. 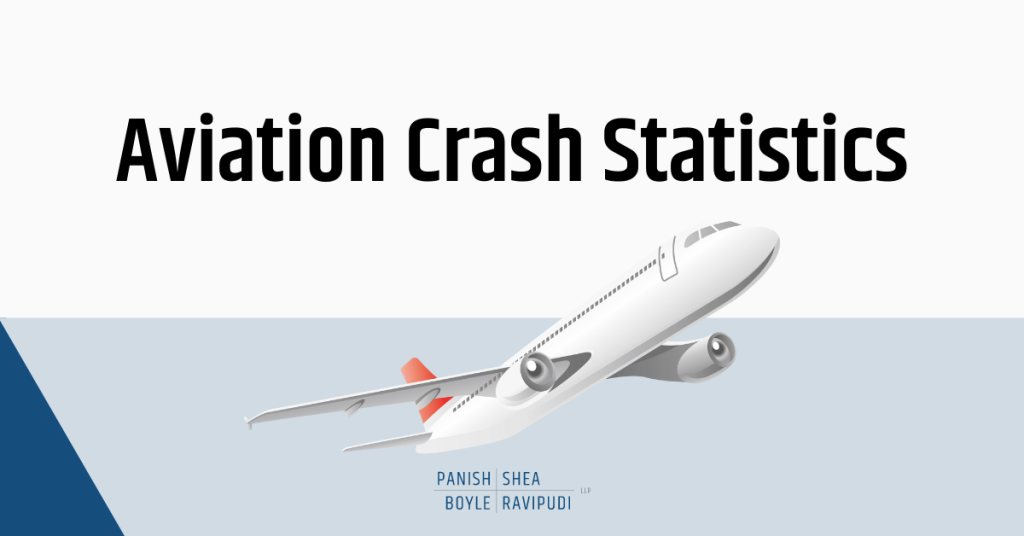 “Statistics show that up to 80 percent of all aviation accidents can be attributed to human error.”

Statistics show that up to 80 percent of all aviation accidents can be attributed to human error. The most dangerous times include takeoff and landing and the time periods before and after these events. Pilot error is thought to account for 53% of aircraft accidents, with mechanical failure (21%) and weather conditions (11%) following behind.

The NTSB database, which has records of every reportable accident since 2008, shows over 13 thousand accidents with at least one issue pertaining to personnel. All these accidents include over 20 thousand findings related to personnel, with an average of 1.54 per accident.

On the other hand, its important to note that other factors are always in play when pilot error occurs. The aircraft, environmental issues, and organizational issues are a few examples.

How Safe is Air Travel?

Compare it to other major forms of transportation – with 0.04 deaths per 100 million miles traveled, train travel is much more dangerous than airplanes’ 0.01 deaths per 100 million miles. However, air travel is only as safe as the operator, the equipment, and the training procedures that underlie the flight itself. Without stringent aviation safety training and controls, air travel is unsafe for private and commercial passengers.

How Many Plane Crashes Have Taken Place in 2022 So Far?

Not accounting for small planes and helicopter crashes, there have been 2 plane crashes in 2022 so far. 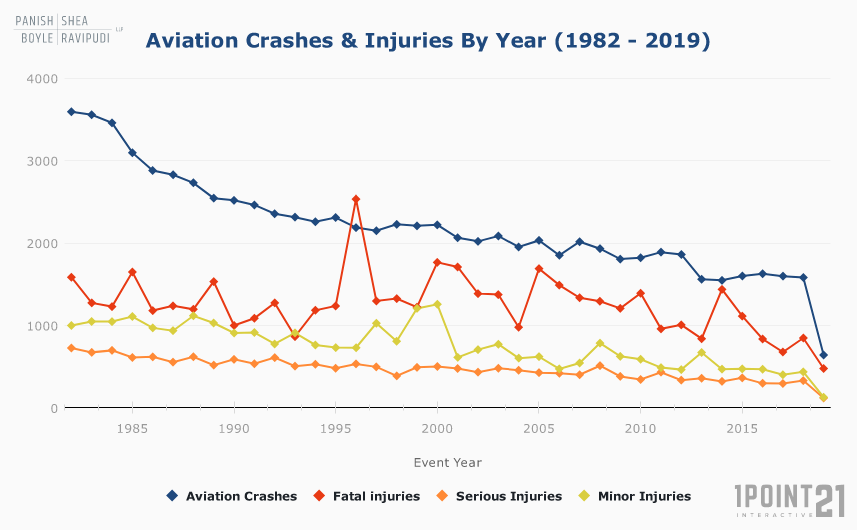 Additionally, here’s the full table of data for all aviation crashes that took place between 1982 and 2019.

Please note that the data for 2019 is incomplete which explains the sharp decline in crashes.

Nearly Half of All Aviation Crashes Happen During Landing or Takeoff

One fact becomes clear after looking at historic aviation crash data and focusing on the phase of flight during which the crash took place: Landing and Takeoff are the most complex phases of flight for any airplane. Nearly half of all the aviation crashes we analyzed covering the period 1983 – 2019 took place during either landing or take off procedures. These phases place a heavy load on airline crews and ground teams as well.

The tough combination of constant airplane configuration changes, having to navigate the plane, communicating with Air Traffic Control, and keeping an eye on ever-changing weather conditions increases the potential for unanticipated events which sometimes leads to a crash.

This following chart visualizes the disparity in aviation crashes when looking at the phase of flight in which the accident took place: 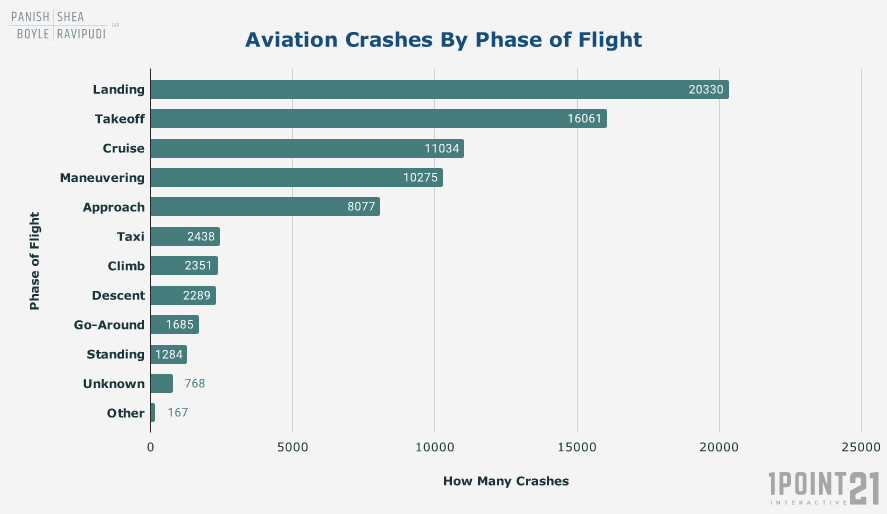 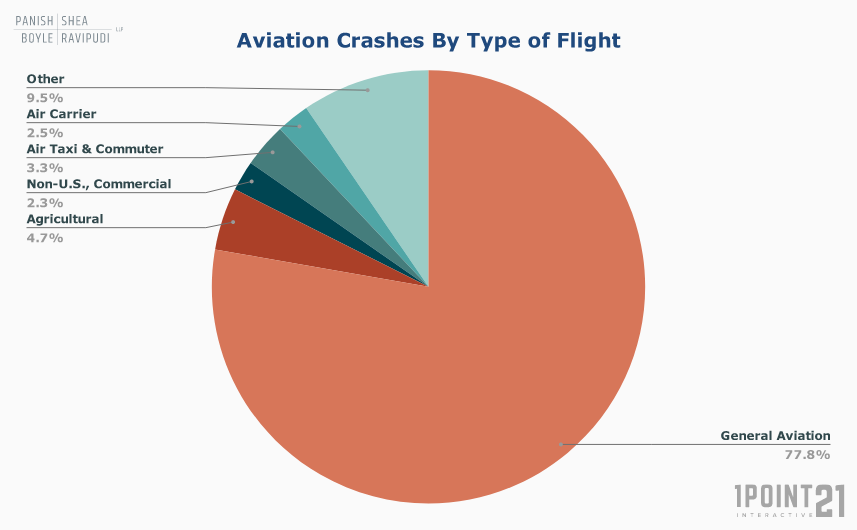 One of the main reasons why general aviation planes are involved in so many crashes is that there are many more of them flying than scheduled commercial flights.

However, if we look at the percentage of fatal accidents by the type of flight, we see that general aviation was involved in almost 45%, while non-US commercial and other flights share almost half of crashes that involved a fatality. 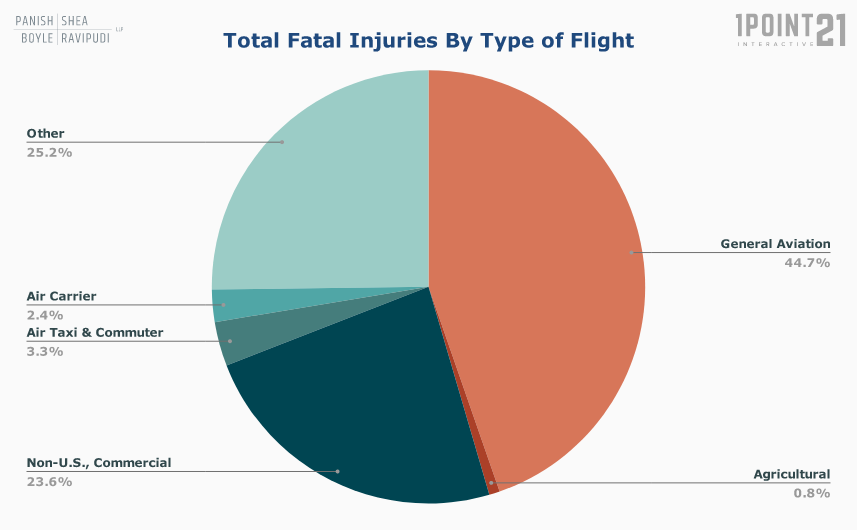 No matter what the aviation accident statistics, one fact remains clear – investigating an aviation accident is time-consuming and complex. It’s also necessary when an aviation-related lawsuit is filed. If you have been injured in an airplane accident or your loved one has lost his or her life, don’t delay. Your time to file could be limited. Call an experienced, reputable law firm for the help you deserve. Panish | Shea | Boyle | Ravipudi LLP represents personal injury victims nationwide. We have what it takes to fight for you in court and reconstruct what happened to you in the air. Call today for a free case consultation.