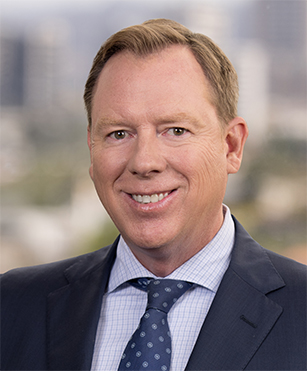 Panish | Shea | Boyle | Ravipudi LLP founding partner Kevin Boyle specializes in resolving large, high-profile plaintiffs cases by trial or settlement. As an experienced Los Angeles personal injury lawyer, he represents a number of clients in a wide range of matters — from wrongful death to catastrophic personal injuries to victims of sexual assault and abuse to serious fraud.  The common thread of all of Mr. Boyle’s cases is that he represents people who have been severely wronged by powerful entities, and he seeks to not only hold those entities financially responsible, but to force them to change their ways.

Among his notable cases, Mr. Boyle represented two U.S. soldiers who were severely injured in a helicopter crash in Iraq in a case against the helicopter manufacturer who asserted that it was immune from liability because it was a government contractor — obtaining the largest known settlement in a case of this kind.

In the highly publicized Dominguez v. City and County of San Francisco, Mr. Boyle served as co-trial counsel in the case which resulted in a record jury verdict for the wrongful death of a 4-year-old girl.  The city and county of San Francisco completely denied responsibility but the jury found it to be 100% responsible. The case was recognized by numerous pubications as one of the Top 10 Verdicts in America.

In another groundbreaking case, Mr. Boyle represented journalists whose personal phone records were improperly examined in an illegal investigation ordered directly by the Board of Directors of the Hewlett Packard corporation.  The case resolved in a confidential settlement that included monetary and non-monetary components.

He also represented numerous victims of the San Bruno gas explosion, caused by faulty gas pipes that were the responsibility of Pacific Gas & Electric (PG&E), and was involved in spearheading the effort that resulted in the court’s decision that the issue of punitive damages against PG&E would go to the jury.  The resolution of the case involved both monetary and non-monetary components to prevent such a disaster from happening again.

Additionally, Mr. Boyle served as co-trial counsel in Yoon v. United States, a case involving a U.S. military fighter jet that crashed into a family home after the pilot had safely ejected. The jet had been maintained improperly and the case resulted in the jury delivering the largest known wrongful death verdict against the U.S. military.

Mr. Boyle holds an A-V ranking from the prestigious Martindale-Hubbell, which is the highest ranking a lawyer can attain in terms of ability and ethics. He has been recognized by the Daily Journal as one of the Top 100 Lawyers in California, named among Lawdragon’s 500 Leading Plaintiff Consumer Attorneys, and he has been profiled as one of The Best Lawyers in Los Angeles by the Los Angeles Times.

In 2018, Mr. Boyle was inducted as a Fellow of the American College of Trial Lawyers, one of the premier legal associations in North America, composed of the best of the trial bar from the United States and Canada with fellowship limited to one percent of the total population of any state or province.

Mr. Boyle is a member of the Amicus Committee of the Los Angeles County Bar Association(LACBA) and serves on the Board of the Law College Association of the University of Arizona.

Prior to co-founding the firm, Mr. Boyle served the country as law clerk to Chief Justice William H. Rehnquist of the United States Supreme Court and, before that, to Judge Melvin T. Brunetti of the United States Court of Appeals for the Ninth Circuit. He started practicing law on the defense side with the law firm Kirkland & Ellis before dedicating his career to helping plaintiffs.

Following graduation from Vanderbilt University, Mr. Boyle studied law at the University of Arizona. He finished law school first in his class, served as the Business Editor of the Arizona Law Review, and published an article concerning manufacturers’ duties to retrofit defective products before they cause further injury.

Kevin Boyle in the News:

The following is a list of some of the articles in which Mr. Boyle is featured: