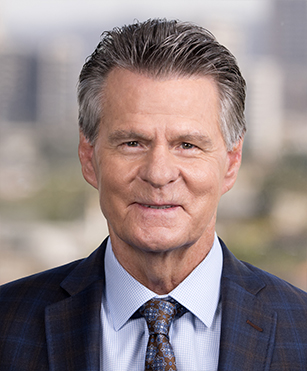 Daniel W. Dunbar is a trial lawyer with Panish | Shea | Boyle | Ravipudi LLP and has obtained hundreds of millions of dollars in verdicts and settlements for plaintiffs in catastrophic personal injury, wrongful death, product liability, and pharmaceutical cases. Over the course of his 30-year career, Mr. Dunbar has represented well over 5,000 clients involved in personal injury claims, including 1,100 women injured by the Dalkon Shield intrauterine device.

Since joining the firm, Mr. Dunbar as secured numerous eight-figure results on behalf of plaintiffs including a $41,864,102 jury verdict and subsequent $46,000,000 settlement in a case involving a United States Air Force Captain who suffered catastrophic injuries after being struck from behind while on his motorcycle and then dragged the length of a football field and a half by a Southern California Gas Company truck. The parties agreed to a settlement of the case following the punitive damages phase of the trial, but prior to the jury’s verdict on those damages being announced.

Mr. Dunbar also obtained a $32,000,000 settlement for a passenger who suffered paraplegia after the van he was riding in rolled over on the Interstate. The wheel had come off an axle that had recently been repaired out-of-state and it was later proven that a part from an oversees company that was utilized in the repair was defective.

Additional settlements obtained by Mr. Dunbar include, but are not limited to:

Recognized as a Best Lawyer in America and among the Lawdragon 500 Leading Plaintiff Consumer Lawyers in the country, Mr. Dunbar is also an AV-rated lawyer — the highest rating established by Martindale-Hubbell — and named a Southern California Super Lawyer since 2007. He is repeatedly recognized among his peers as a tenacious and compassionate attorney whose dedication to obtaining justice for his clients is unparalleled.

Mr. Dunbar is a graduate of Loyola Law School and California Polytechnic State University San Luis Obispo. He had his own practice for a number of years prior to joining the firm and previously served as an attorney with the Beverly Hills office of Melvin Belli, Sr., a pioneer in the field of plaintiffs’ personal injury. Following Mr. Dunbar’s tenure with the Belli Firm, he became partners with David S. Sabih, a prominent trial attorney throughout the state of California.