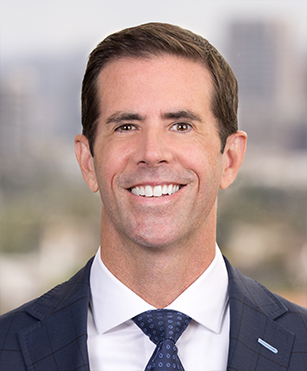 Spencer Lucas is a trial lawyer and partner at Panish | Shea | Boyle | Ravipudi LLP specializing in litigating complex catastrophic personal injury, products liability, wrongful death, and sexual abuse cases. A member of the firm since 2007, he has extensive experience in cases involving traumatic brain injuries, spinal cord injuries, amputations and has successfully recovered over $500 million for his clients. Mr. Lucas prides himself on not only helping survivors of trauma and their families recover from tragic situations but by implementing institutional safeguards for the community.

Ranked among the Top 100 Southern California Super Lawyers in 2022, Mr. Lucas is recognized as a leading trial lawyer in California trying cases in venues across the state resulting in eight-figure verdicts. He has been the recipient of numerous awards for his work in the courtroom including nominations as Consumer Attorney of the Year by Consumer Attorneys of California (CAOC) and Trial Lawyer of the Year by the Consumer Attorneys Association of Los Angeles (CAALA).  Mr. Lucas is a member of the American Board of Trial Advocates (ABOTA) with an elevated rank of Associate due to the number of lengthy trials to verdict he has completed and is annually recognized as a Best Lawyer in America® .

Mr. Lucas has obtained numerous eight-figure verdicts and settlements in cases throughout California, including the following:

Outside the courtroom, Mr. Lucas is a frequent speaker on various issues, including traumatic brain, spinal cord injuries, and sexual abuse, and actively publishes articles in trade publications on a wide range of legal topics. He also spends much of his time dedicated to assisting his clients recovering from trauma obtain the best medical treatment available.

In addition to his work as a trial lawyer, Mr. Lucas is a member of the Pepperdine School of Law Dean’s Council and serves on the Board of Directors of the Los Angeles Trial Lawyers’ Charities (LATLC) which funds many local charity groups focusing on education, survivors of abuse, children, and the homeless.

Fluent in Spanish, Mr. Lucas works with many of the firm’s Spanish-speaking clients and is frequently asked to give legal commentary on national Spanish television and radio programs.  He has lived in Havana, Cuba, and throughout Mexico, where he spent his summers in college building homes for the homeless in Ciudad Juarez.

Mr. Lucas is a member of the State Bar of California, the District of Columbia Bar and the Washington State Bar Association. He is an active member of the Consumer Attorneys Association of Los Angeles, Consumer Attorneys of California, and Los Angeles County Bar Association, and regularly volunteers his time providing pro-bono legal services to foster children and children facing immigration deportation proceedings.