In an instant, your life can change forever. A car swerves into your lane or an animal darts across the road. Maybe somebody does not stop in time or falls asleep at the wheel. A car accident can leave you severely injured or cause the wrongful death of a loved one. Many serious injuries result in permanent mobility impairment. In every case of a severe traffic accident, the accident victims involved will be paying the heavy price of loss, whether physical, emotional or property. You may be entitled to financial compensation that may help you with your burden and restore some of what was lost. Contact Panish | Shea | Boyle | Ravipudi LLP for a free consultation with a skilled Orange County car accident attorney.

Orange County is located on the southern end of Los Angeles. Freeways are the hotspots for fatal car crashes in this region. In the United States, there are over 2 million car accidents every year and in 2018, there were 33,654 car accident fatalities. Of those, there were 3,563 people killed in vehicle accidents in California and southern California is home to some of the most congested freeways in the state. Cypress surface streets saw four fatalities in 2011. Orange sees fewer, but motorists should still watch when traveling Villa Park and Chapman. Santa Ana’s auto accident fatalities tend to occur along Harbor Boulevard just south of the 22 and surrounding areas. Like Orange, Irvine sees fewer fatalities. Huntington Beach has a couple fatalities per year around southern Magnolia and Brookhurst. Newport and Dana Point have few fatal crash victims. Speak with our Irvine car accident lawyer if you or a loved one was involved in a fatal crash.

It’s important to remember that not all car accidents involve just vehicles. 2018 data from GHSA shows that California is among the top 15 states in the country with the highest rate of pedestrian fatalities. Distracted driving, drunk driving, or reckless driving can cause devastating pedestrian accidents, especially on crowded city streets. No matter what caused your car crash, contact an Orange County car accident lawyer as soon as possible to discuss how you can recover compensation to cover for your damages.

We can probably think of a handful of reasons people get in car accidents, but knowing the most common causes can help us be mindful of risks and take steps to develop safer habits. The first is distracted driving. Someone is on the phone, eating, looking at a map, or doing all three while shifting, wiping food off their shirt or changing the radio station. Our desire to multitask is life-threatening if done at inappropriate times.

Speeding 10, 20, or 30 mph over the limit not only increases the risk of getting in a car accident but raises the likelihood that a crash will cause severe injury or death. Drunk driving is also a killer, ranking among the highest causes of fatalities. Reckless driving disobeys traffic laws and courtesy, causing others to dodge their vehicles. Rain also plays a big role in causing fatalities in Southern California. Running red lights or stop signs causes intersection fatalities. The inexperience of teen drivers and the low visibility of night driving, particularly in areas without street lights increase risk. Vehicle design defects sometimes play a role as well.

Other causes include unsafe lane changes, wrong-way driving, road rage, potholes, drowsy drivers, unsafe turns, tailgating, driving under the influence of drugs, high winds, tire blowouts, fog, sharp curves in the road, street racing, and loose objects in the car. Being aware of these causes can help us drive more defensively. If a negligent driver caused your accident, call our Irvine car accident attorneys to represent your claim.

How Can an Orange County Car Accident Lawyer Help With My Claim?

If you have sustained significant loss, you have a chance of gaining compensation through a lawsuit.  Though you can often file an injury claim yourself, professional accident lawyers not only have the necessary research into the legal system but also have the experience of winning car accident cases. Your life may have changed drastically due to a car crash, and your losses may include medical expenses, property loss, and lost income due to disability or other losses. Our Orange County car accident attorneys can help you win much-needed compensation to help you get back on your feet. Pursuing a lawsuit may also help protect other drivers from similar losses.

How Many Motor Vehicle Accidents Happen in Orange County Each Year?

Looking back to 2010, there has been a gradual increase in motor vehicle accidents. In 2010 there were 34,779 reported collisions and in 2017 there were a total of 35,053 collisions. This was a total increase of 274 collisions during this time period.

How Many People Died in Vehicle Collisions in Orange County?

Here’s a breakdown of fatalities each year since 2010: 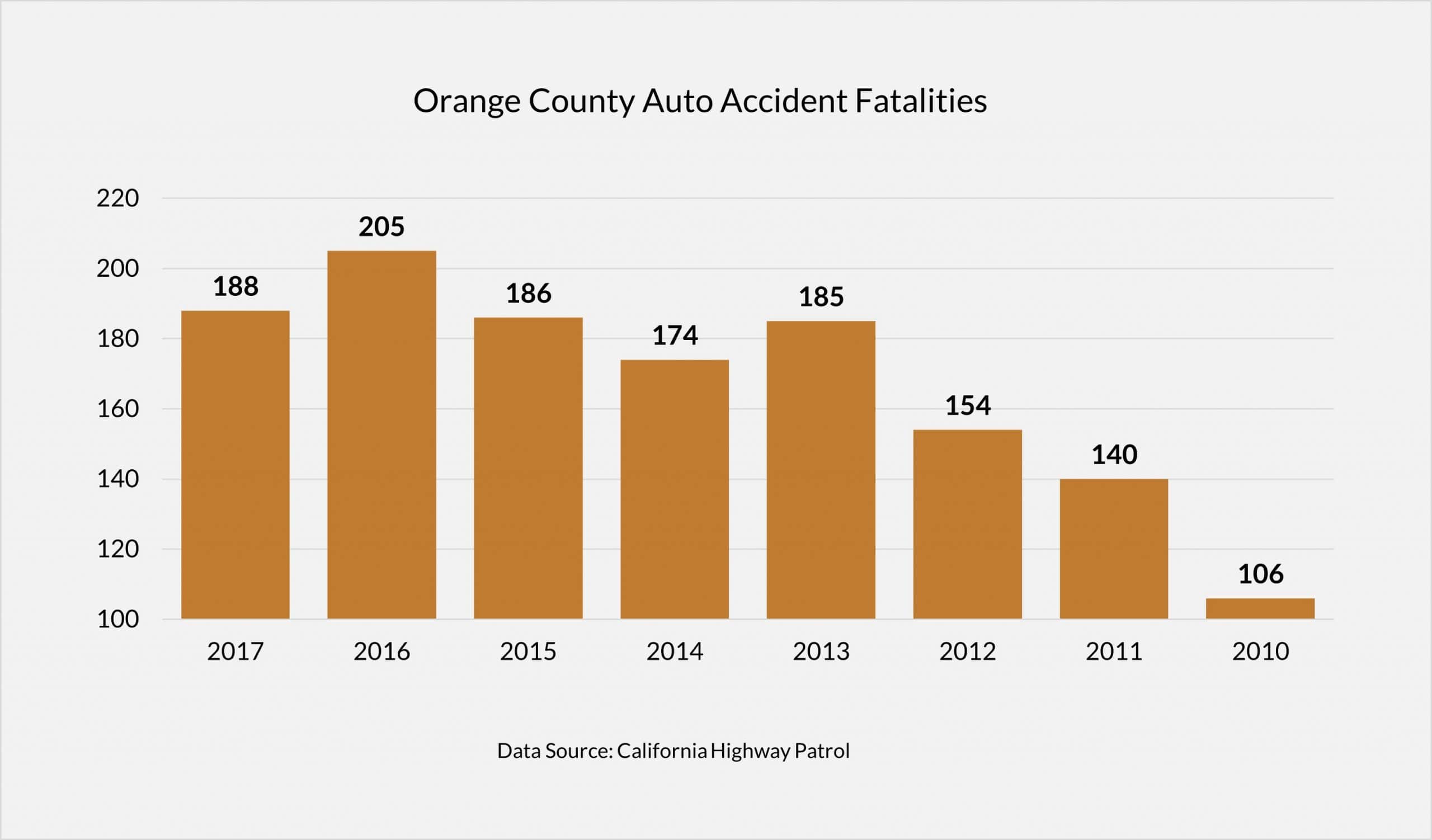 While Orange County is one of the most popular vacation destinations in the country with beautiful beaches and weather, the influx of visitors and congestion on the roads increases the likelihood of traffic accidents. According to 2015 data from the California Highway Patrol, male drivers are more likely to be in car accidents in Orange County. The only cities where more female than male drivers were in car accidents resulting in injuries in 2015, were Villa Park and Laguna Woods where the difference was one accident. 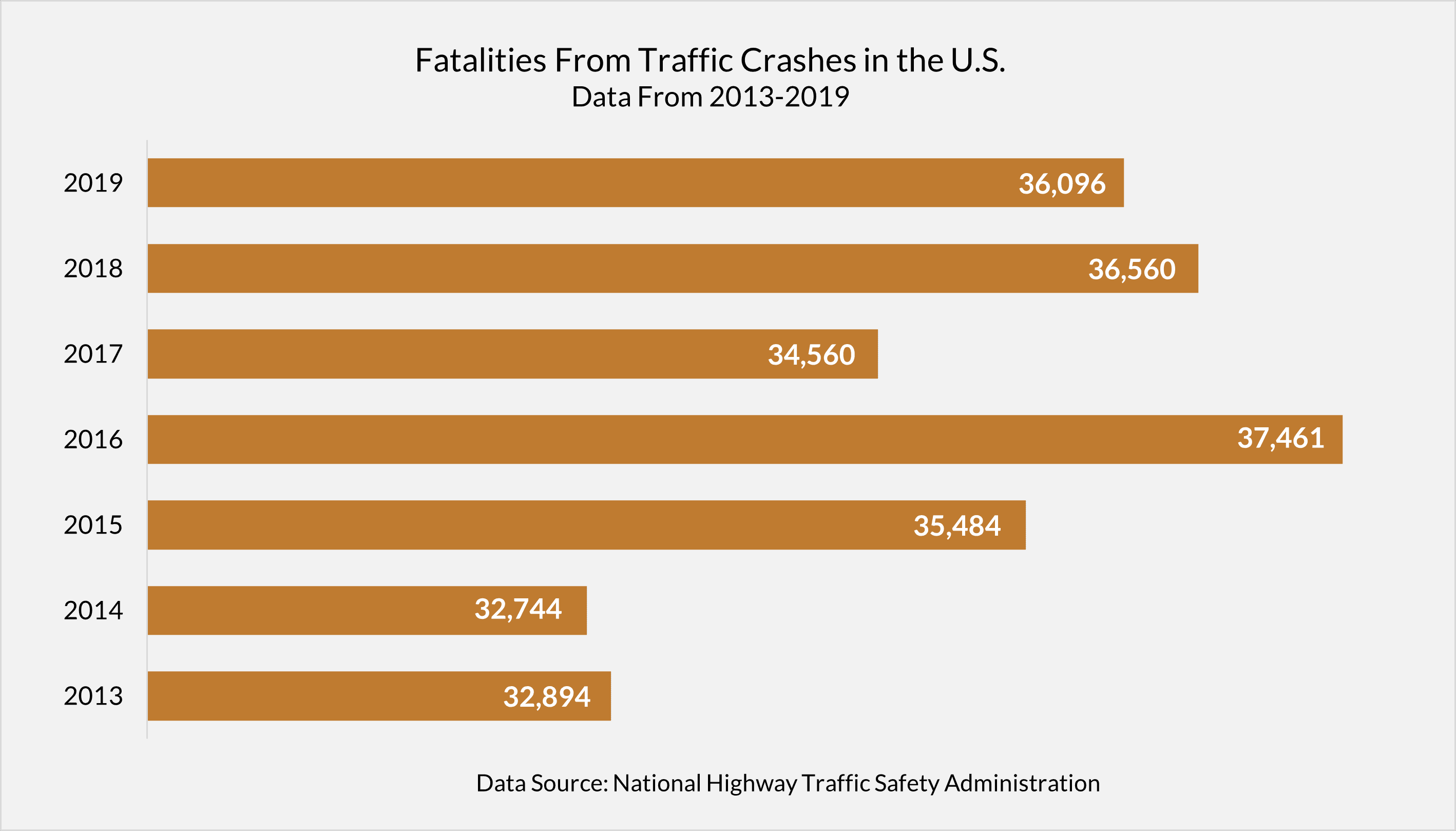 Looking at the data from the National Highway Traffic Safety Administration (NHTSA), you’ll see that there has been an increase in the total traffic fatalities in the U.S. in the last several years. In 2016 the total was up to 37,461 and this includes the deaths in Orange County and throughout CA as well.

The law office of Panish | Shea | Boyle | Ravipudi LLP wins cases. We have proven experience winning over 150 verdicts for more than $1 million each. A $15 million case involved a teenager who sustained brain damage due to a truck running a red light and hitting his mother’s car. Another settlement won $9 million for a teen who lost both legs when her car hit a broken guardrail.

The U.S. News & World Report has ranked our practice as a “Tier 1” firm for Plaintiffs Personal Injury Litigation, which is the highest rank a law firm can receive. This means our legal practice is ranked among the top 12 in the country. Our attorneys provide consultation to other lawyers across the nation.

Every type of auto accident case has an opportunity for compensation, even those involving commercial trucks, product defects, vehicle recalls, pedestrian accidents, and poor roadway planning or maintenance. We take leadership roles in national class-action lawsuits and have been nominated repeatedly for professional honors, including Trial Lawyer of the Year. Call our car accident lawyers in Orange County today! (949) 468-5777 or toll-free at 1-877-800-1700 for your free, no-obligation case evaluation today. We represent clients in Newport Beach, Irvine and throughout Orange County and Southern California.

If you were injured in a crash in LA, speak to our Los Angeles car accident lawyers.