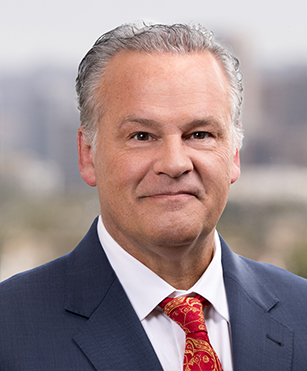 Paul Traina is a trial attorney with Panish | Shea | Boyle | Ravipudi LLP, focusing his practice on litigating large and complex personal injury, wrongful death and product defect cases on behalf of injured individuals and consumers in California and Nevada. Mr. Traina is a fiercely competitive litigator and experienced trial attorney who has obtained over $3 billion in verdicts and recoveries for his clients.

In 2019, Mr. Traina and Lyssa Roberts obtained a $10,650,000 settlement for a man who suffered catastrophic burns as a result of an explosion due to a gas leak.

After graduating from Pepperdine Law School in 1991, Mr. Traina began his career as a defense attorney at Harrington, Foxx, Dubrow and Canter where he worked on personal injury and product defect cases, trying five cases in his first four years while at the firm.

Prior to joining Panish | Shea | Boyle | Ravipudi LLP, Mr. Traina was a partner at the prestigious law firm of Engstrom Lipscomb & Lack from 1996 through 2017 where he litigated and tried cases involving class actions, personal injury, business litigation, qui tam, and securities actions on behalf of consumers and businesses.  In 1998, Mr. Traina represented Fightertown U.S.A. in a securities fraud case against Robertson Stephens that resulted in a $7,000,000 jury verdict after a four-week trial.  In 2006, he represented a former CEO of CarsDirect involving a wrongful termination action that resulted in a verdict for over a $5,000,000.  In 2008, Mr. Traina was part of a team of lawyers that worked on the California Natural Gas Anti-Trust Cases which resulted in a settlement over $1,000,000,000 after a six week trial. He also In 2014, he represented Casablanca, a company that sold travel certificates, in a case brought against Wyndham Hotels for Breach of Contract and Fraud.  After a 15-day jury trial, the jury returned a verdict for $3,500,000 and found that Wyndham was also liable for punitive damages.

Mr. Traina is recognized as a Best Lawyers in America® as well as a Southern California Super Lawyer and is routinely a guest speaker and lecturer at Loyola Law School, CAALA, and Bridgeport, speaking on issues involving trial practice including Opening and Closing Arguments, Direct and Cross Examination, Depositions and Ethics. He has also been published in various legal publications which include topics involving Fiduciary Duties; Class Actions; Discovery Strategies; Qui Tam Actions and the False Claims Act.